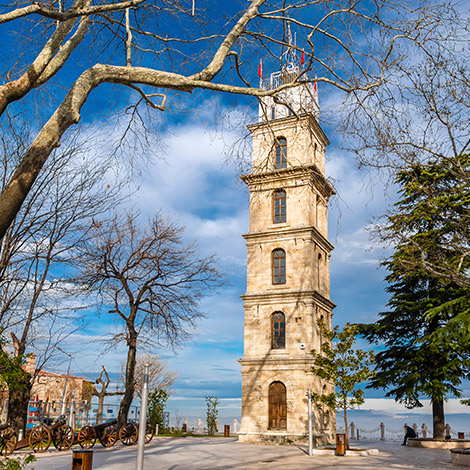 Bursa is a City in South East of Sea of Marmara with population of approximately 3 Million and that the fourth big city of Turkey.

Eastern neighbors of the city are Bilecik and Adapazarı. There are cities named İzmit, Yalova, İstanbul and The Sea of Marmara in North of Bursa. In South, Kütahya, Eskişehir and in West Balıkesir are the cities that surrounded Bursa.

Elevation from the sea level of the city is 155 meters (170 yards). Bursa has mild climate in general. The hottest months of the city are July-September and the coldest months are January-February. Months October – November and April – May are mostly rainy. It is possible to come across with hard air conditions in Uludağ while there is a smooth climate in region that is close to Sea of Marmara. Average rate of humidity in Bursa is around 65-70 %.

Bursa is the gate of Anatolia to Istanbul in geographical point of view. You can reach Bursa from Antalya, İzmir, Ankara and Konya by land, using highways built recently. Specifically highway between Istanbul and Izmir is one of the best options to reach Bursa by driving.  Besides bus companies hold services from Istanbul to Bursa every hour using their service centers in Istanbul and also from Sabiha Gökçen Airport (SAW) to Bursa bus terminal where busses of Bursa Municipality takes you to any district inside Bursa.

From İstanbul you can reach to Bursa also by sea ways. IDO (Istanbul Sea Bus Entity) and BUDO (Bursa Sea Bus Entity) are the operating companies serving between Istanbul Bursa and inside the respective cities.

You can choose Fast Ferry services from Yenikapı and Kabataş in İstanbul either by car or as a passenger to Bandırma that is a district in Balıkesir.

Besides you can reach to Bursa Airport by your private plane or helicopter and sea taxi also.

Bursa is at the top of list of cities that should be seen in Turkey. We will continue telling about Bursa in next articles…

Alternative Trip Courses in Bursa (I)

Alternative routes for a trip in Bursa

Travel [email protected] - December 19, 2020
0
Göbekli Tepe mound is located in northeast of modern Şanlıurfa that is a city in southeastern Turkey. The hill where Göbekli Tepe relics are...

Recipes [email protected] - August 5, 2020
0
Tutmaç Soup As said for centuries Tutmaç Soup is an heritage from Seljuks and still consumed with enjoyment in our ages. We are sure you...

ABOUT US
Newspaper is your news, entertainment, music fashion website. We provide you with the latest breaking news and videos straight from the entertainment industry.
Contact us: [email protected]
FOLLOW US
MORE STORIES